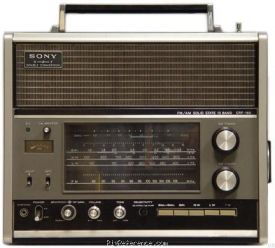 Find the Sony CRF-160 on Amazon

Having owned a number of high end digital and analog portables such as The National Panasonic RF 5000 and A, Grundig 6001/210, Nordmende Globetrotter, Zenith 1000,3000 and 7000 and the Sony CRF 1, 6800w, 7600G and the 2001 and 2010, I was pleasantly surprised to find how clean sounding and stable the CRF 160 was. The spread band SW tuner has a respectable low noise floor that can fool you into thinking that it has poor sensitivity until an external antenna is connected. It comes to life in a most impressive way. An odd problem became apparent when I initially tried the BFO. The BFO injection level was so high that the IFs were swamped into insensitivity. The manual gain control didn't have enough range to provide proper control over the IFs until I changed resistor values. Why this escaped quality control and the attention of the previous owner I don't know but it works nicely after my mod and is very stable after a few minutes. The switchable IF filter has a reasonable shape considering the time frame. A real surprise is the FM front end which has great capture ratio and adjacent strong channel rejection WITH fine sensitivity! The SW turret tuner is Sony's version of the Grundig Satellit portable innovation but theirs is a bit better minus the gold contacts! I have recapped my 160 as well as adding a SO239 jack on a pigtail for the 50 ohm SW spread band range and the dial pointers now have red and yellow LEDs. Original dial light was retained. Very happy with this set.

Add your own review for the Sony CRF-160

Estimating the value of a rig can be challenging. We collect prices paid by real hams over the years to help you estimate the value of a used Sony CRF-160. Just bought or sold this model? Let us know what you traded it for and help other ham operators!

These estimates are based on the following prices: (see all 0 prices)