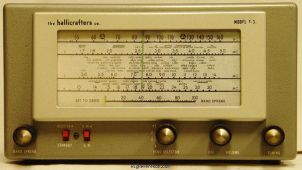 Find the Hallicrafters S-38D on Amazon

This was my first receiver, and was a lesson in patience as many first receivers are. Common to 455 KHz single conversion receivers, the performance above about 12 MHz is really poor, and the S-38D is no exception. This receiver is really an "All American Five" at it's core, but with a front end modified for the extended frequency coverage.

The "BFO" consists of a gimmick capacitor causing the IF stage to oscillate.

The front end coils are wound on 2 forms, 1 for the RF, one for the LO. Therefore the bottom end of each band is unadjustable.

This receiver is okay to a degree for casual listening, and can be fun to spin the dials on, but it isn't a great performer, especially if compared to more modern receivers. A quick glance at eBay reveals many of these go for between $20.00 to $60.00.

It goes without saying that if you come into possession of one, it is highly suggested that due to it's age you have it checked out by a competent radio technician.

Add your own review for the Hallicrafters S-38D

Estimating the value of a rig can be challenging. We collect prices paid by real hams over the years to help you estimate the value of a used Hallicrafters S-38D. Just bought or sold this model? Let us know what you traded it for and help other ham operators!

Based on historic data, today's second-hand price of the Hallicrafters S-38D is around: