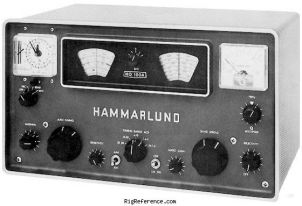 Find the Hammarlund HQ-100AC on Amazon

The Hammarlund HQ-100AC general coverage receiver with analog display. It tunes shortwave in four bands: .54-1.6, 1.6-4, 4-10, 10-30 MHz and 20 meter bandspread. Other enhancements include: antenna trimmer, noise limiter, RF gain, S-meter, BFO, stand-by and AVC on/off. This radio does not have a built in speaker. There are 3.2 ohm speaker terminals on the rear panel. The suggested optional speaker is the S-100.

The Hammarlund HQ-100A is the same, but without the built-in 24 hour clock-timer.

She Was A Beautiful Gal

She drifted a bit on sideband, but for a 14 year old boy "graduating" from a Hallicrafters S-120, this rig was heaven on earth. Spent many nights into the wee hours of the morning logging foreign broadcasts and "utility" stations, and collecting loads of QSL cards.

She used to glimmer and shine, with her two big tuning dials all lit up and begging to be handled.

Then one day, a "friend" came over with his ham transmitter, but minus a requisite T/R switch. And in the twinkling of an eye, that someone dimmed her lights, forever.

Add your own review for the Hammarlund HQ-100AC

Estimating the value of a rig can be challenging. We collect prices paid by real hams over the years to help you estimate the value of a used Hammarlund HQ-100AC. Just bought or sold this model? Let us know what you traded it for and help other ham operators!

Based on historic data, today's second-hand price of the Hammarlund HQ-100AC is around: