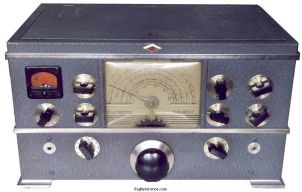 Add your own review for the National Company NC-2-40D

All prior moving coil carriage receivers from the NC-100 to the NC-240C followed the same naming format. The C was for Commercial, and a CS model was Commercial Special. There were other variants built for specific customers.

The NC-240D (the D was for Dual Range since it had General Coverage and Bandspread for the 80-10M ham bands followed the same path but due to some error in typesetting it came out as NC 2-40-D in the ads which made no sense. Internal documentation from Engineering to Production to Service Dept used the original format. It was even used in a June 1968 brochure listing the company history and milestones.

My involvement during 1963-69 was in the Service Department as Tech and Manager and in Engineering as Sr Engineering Aide. My NC-240D collection includes a first run 1946 model which shares a lot of the earlier NC-200 features plus a 1949 version.

I use the later version NC-240D often on CW and AM in the vintage radio part of my ham station along with a similar age Johnson Viking I. It is very stable after a short warm up and sensitivity on the higher frequencies far exceeds the competition which I have also restored and compared using restored vintage Hewlett Packard and other high end test equipment as I used at National Radio.

My NC-240D ratings below are based upon what was the norm when it was built.

Add your own review for the National Company NC-2-40D

Estimating the value of a rig can be challenging. We collect prices paid by real hams over the years to help you estimate the value of a used National Company NC-2-40D. Just bought or sold this model? Let us know what you traded it for and help other ham operators!

Based on historic data, today's second-hand price of the National Company NC-2-40D is around:

These estimates are based on the following prices: (see all 1 prices)