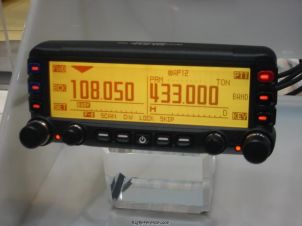 Find the Yaesu FTM-350 on Amazon

The Yaesu FTM-350R dual band mobile transceiver operates on 2 meters and 70 centimeters. And that is with a full 50 watts of reliable power on both bands. And even QRP 220 MHz (1 watt) is also supported (USA version only). It has two separate receivers with dual speakers on the rear of the control head. The controls are easy to use. On the left receiver enjoy the AM, FM and stereo FM broadcast bands with extended receive: 0.5-1.7, 76-108, 108-250, 300-1000 MHz (less former cellular frequencies). The right receiver covers 108-250, 300-1000 MHz (less former cellular frequencies). Enjoy 500 memories with alpha tagging for the left band and 500 for the right band (total 1000) plus 9 DTMF memories. And the FTM-350R menu system is easy to use. There is also stereo line inputs available. This radio is compatible with various APRS® functions. The FTM-350R is ready to accept the optional FGPS-1 internal GPS receiver-antenna. The front panel is easily remoteable with the 10 foot included cable. A 20 foot remote cable is available optionally. There is a front panel built-in microphone activates PTT transmission. Supplied with: MH-48A6JA DTMF hand mic, Front panel suction type mounting bracket, DC power cable, 10 foot control panel cable, speaker cable, spare fuse and Owner's Manual.

I have the A/R version of this rig, purchased new just a few months ago. It replaced an FT-2900 in my truck and, I have to confess, while I like the rig I'd rather have mt FT-2900 back.

First, the manuals for this rig (there are two, one for the radio and one for the APRS) are quite possibly the worst manuals Yaesu has ever put out, and that's saying something for a company notorious for poorly laid out manuals.

Second, while the rig has some great features it also has some that make you wonder what the engineers were thinking, like a recording barometer that resets when the rig is off, a 1 watt mode for 220, and a mounting system that's just about useless. It also lacks some features that leave you scratching your head trying to figure out why it wasn't included, such as a tone search feature.

The remote head is nice, with a good display, but the inability to mount it to the rig body means you're stuck with the suction cup mount that's included (and is the only mount offered for the rig by Yaesu) and frankly, it sucks... or doesn't suck actually, falling off constantly at the slightest bump.

The audio on this rig also leaves a lot to be desired. There is a speaker on the body, but since you can't mount the head to the body you'll probably have that buried under a seat somewhere, rendering it useless, and the twin speakers in the head are small and underpowered, and face away from the operator, which means you'll have a hard time hearing this rig in almost any vehicle. It does come with an audio splitter plug, allowing for the addition of two external speakers, but if the audio had been designed properly you wouldn't need them. As it is, they're almost mandatory to be able to hear this rig.

Then there's the APRS and messaging system... Good, but also in need of major improvement. Entering any kind of text for a message is a real chore, and if you run the APRS you'll have to dedicate one VFO to it, which means forget about actually using both VFO's to monitor anything. Also, anytime the APRS transmits it will cut off the receive on the other VFO, so you'll miss parts of transmissions.

With 500 memories per VFO you'd think you'd be all set to store anything you need, but there's two serious flaws with the system. First, it's impossible to transfer or copy a frequency from one side to the other and, second, there's no bank system that you can use. That, combined with the inability to easily program priority frequencies (or overwrite them with new) means programming software and a laptop are pretty much mandatory to get the most out of the system.

It's not all bad news though. The rig does perform quite well, and since it's mostly a software based system Yaesu can (and has) come out with updates for the firmware to add new features or change things on menus. Alas, they will not release anything that will let owners do such changes on their own, so you can't redefine to soft menus and controls the way you might want them, but it does give hope that as they get feedback from owners things will improve.

Lastly, the inclusion of 1 watt transmit on 220 strikes me as almost an afterthought on this rig. By the time that 1 watt signal gets to your antenna (which will need to be a tri-bander) you've already lost a good part of that watt due to feedline losses. Why they didn't make it at least 5 watts, and preferably 10 or more, I'll never understand.

The choice I had when buying this rig was between it and the Icom IC-2820. If I had the choice to make over again I'd go with the Icom.

Add your own review for the Yaesu FTM-350

Estimating the value of a rig can be challenging. We collect prices paid by real hams over the years to help you estimate the value of a used Yaesu FTM-350. Just bought or sold this model? Let us know what you traded it for and help other ham operators!

Based on historic data, today's second-hand price of the Yaesu FTM-350 is around: