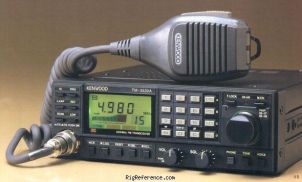 Find the Kenwood TM-3530A on Amazon

I was at the 1993 Elmira Winter Hamfest and had seen that a friend of mine had this 222MHz rig for sale. Since Elmira, NY has two 222MHz machines, I bought it. I made my own 1/4-wave GND plane for it and was able to work the area's two 222MHz machines. I got to be a trustie later of the 223.980-/R NR2P machine. (Still up at 2016.) The rig will do over 30W and has a nice big heatsink to take it. Don't have to worry about the added expense of a DTMF mic since the rig has a DTMF front faced keypad built on. NICE!!!! Programming is the Kenwood easiness and it does include all the CTCSS tones. Not every 2M rig from the mid to late 1980's had that even. This rig still works 25 years later since I bought it, and it's a keeper. Now, going on 30 years. Good Kenwood RX / TX audio quality with it as well. If I see the 2M, or 440MHz, version of this rig, I would be very tempted to buy it, whether I need it today, or not.

Add your own review for the Kenwood TM-3530A

Estimating the value of a rig can be challenging. We collect prices paid by real hams over the years to help you estimate the value of a used Kenwood TM-3530A. Just bought or sold this model? Let us know what you traded it for and help other ham operators!

Based on historic data, today's second-hand price of the Kenwood TM-3530A is around: