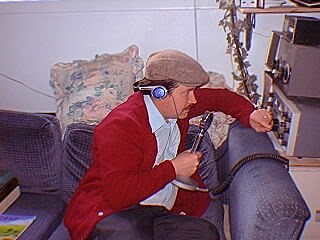 I am a Ham Radio operator in Eugene, OR. My interest in radio started as licensed CB user(KBPN-1418) and I went by 'Little John' (Paul means little and my middle name means John). I was rather discouraged by the language and lack of courtesy though and wished for an alternative. Ham radio was the ticket, although it was several years till I got around to studying for a license. I was first licensed as KB7VIQ on June 6, 1993. On March 14, 2007 my wife became KD7PJW and I (became K7VIQ) as we both took and passed the General exam together. We never were able to get real HF equipment. My Brother Cecil (KB7ZXH) and I had a repeater for years but due to inactivity we took it down. After that we did not get on the air anymore due to local friends moving on from Ham radio.
Years passed and a friend motivated me to take the Extra and am trying to learn code to become a 'Know code ham' using Long Island CW club online course.
73 DE K7VIQ See my www.QRZ.com/db/k7viq listing.