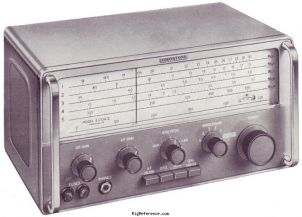 Find the Eddystone EC10A2 on Amazon

Receivers in the EC10A2 Series are primarily intended for use on small sea-going vessels but are equally suited to many other applications in the maritime field. Full coverage of the HF band from 1.5 to 30 MHz is available, together with the 300-550 kHz Marine Band. Instant selection of the International Distress and Calling Channel (2182 kHz) is provided by a built-in crystal controlled converter unit.

Three version of the EC10A2 receiver exist, one for bench-monitoring and two for installation in standard 19-in racking. Type designations are as follows:

Salvaged from a ship in the Red Sea

Back in 1979 I was the marine civil engineer at the Port of Jeddah. Having erected a new beacon on Mismari reef to the south of the port I needed to fix its coordinates so as to be able to report its position to the Admiralty and get it onto the charts. GPS was then in its infancy so I made the fix using intersections. I spied in my scope a ship aground on a reef offshore the Navy base and got permission to board it so as to complete the fix. I removed the ships' receivers one of which was the Eddystone pictured above. After fixing the rectifier with a solid state spare it came to life and I used it for two years. Later I sold it at a junk sale at the Reading and District amateur Radio Club still working. de G4THN

Add your own review for the Eddystone EC10A2

Estimating the value of a rig can be challenging. We collect prices paid by real hams over the years to help you estimate the value of a used Eddystone EC10A2. Just bought or sold this model? Let us know what you traded it for and help other ham operators!