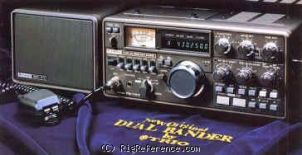 Find the Kenwood TS-780 on Amazon

Very easy rig to operate covering FM,CW,SSB full UK 144.000 - 145.999 on VFO on SSB have either free running adjustment or tight control.
Two settings on FM channel or frequency. Has repeater offset +1600 on 432MHz or -600 on 144MHz also needs tone button next to offset to be depressed to give 1750 tome burst to access repeaters.
The gain controls are some of the best on radios of this era and theres the SSB nic gain which I leave on No3 for FM or No4 for SSB.
Every switch & control some with a function inside another is well marked.Power output is 1watt or 10watts.
These when you find them fetch serious money, seen on ebay £350 - £470 (mine was £450) due to the internal filtering that is as standard no need for anything like a mutech as far superior already fitted.
Never heard a bad audio from these sets, if you see one BUY IT you will not be dissapointed.
One thing with these radios they have a Jones plug power lead and there are two setting one for internal power supply DON'T USE IT! as there is not a cooling fan so can overheat! Just use from a power supply with 12Amp output.

Add your own review for the Kenwood TS-780

Estimating the value of a rig can be challenging. We collect prices paid by real hams over the years to help you estimate the value of a used Kenwood TS-780. Just bought or sold this model? Let us know what you traded it for and help other ham operators!

Based on historic data, today's second-hand price of the Kenwood TS-780 is around: